This section of our website is dedicated to our on-going historical research into the life of the Reverend Nicola Yanney. Father Nicola was the first priest ordained by St. Raphael of Brooklyn. After his ordination, Father Nicola was assigned as the pastor of the newly-formed St. George Orthodox Church in Kearney, Nebraska. Simultaneously, he was given a large missionary territory to administer.

For months at a time, Father Nicola would leave his home and family in Kearney, Nebraska, traveling across the central United States to serve the scattered faithful. Often, Father Nicola visited small groups of families which eventually developed into parish communities; at other times, he ministered to an isolated Orthodox family or individual. Father Nicola served as both a parish priest and a missionary for over 14 years, before departing this life in late 1918. May his memory be eternal! 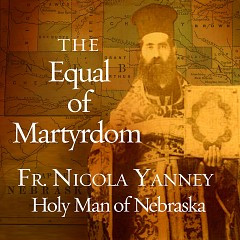 THE EQUAL OF MARTYRDOM

Videos from our 2018 Pilgrimage

Bishop Basil's sermon begins at 44:30 in the video.

John Maddex of Ancient Faith Radio recently interviewed Bishop Basil of Wichita about Father Nicola Yanney and the upcoming pilgrimage for the 100th anniversary of his repose. The interview is 18 minutes long. Please click here to listen to the interview.

An audio recording of a presentation on the life of Father Nicola Yanney. The presentation is approximately 1 hour and 20 minutes in length.

A video of our recent quest to pinpoint the site of the Yanney family homestead in Valley Township, Nebraska. The Nicola Yanney family lived on their isolated homestead from 1895-1904. It was the site of some of their greatest joys and most profound sorrows.

While Father Nicola Yanney occasionally visited communities outside the boundaries of this area, most of his missionary activities were concentrated within the territory outlined in this map. To the Syrian Orthodox faithful scattered throughout this vast region, Father Nicola was not simply as an itinerant priest, but was often seen as the beloved pastor and religious leader of their communities.

During the course of his priestly ministry, Father Nicola performed:

* at least 910 Baptisms (we do not have the baptismal records from the final year of his life).

On November 3rd, a group of faithful from St. George gathered at the graveside of Father Nicola to prayer the Trisagion Prayers for the 95th anniverary of his repose. Father Nicola's funeral took place on November 4th, 1918. May his memory be eternal!

A brief timeline of the events in Father Nicola Yanney's life and a list of his missionary journeys as based upon his sacramental records–revised January 2014. Pdf format (13 MB). Click here.

A new icon commissioned for our parish, painted by Dmitry Shkolnik. The icon shows our founders–Saint Raphael of Brooklyn and Father Nicola Yanney–holding our parish.

In late October of 2008, St. George Orthodox Church hosted a diocesan pilgrimage in honor of Father Nicola Yanney on the 90th anniverasry of his repose. Click here to see photos and read more about the event.